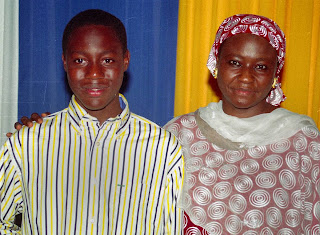 In stories that are coming out about the underwear bomber, we get the idea that he's a human being. I think the more these people can be humanized, the better off we'll be:

The 23-year-old Nigerian man accused of the attempted Christmas Day bombing of an American airliner apparently turned to the Internet for counseling and companionship, writing in an online forum that he was "lonely" and had "never found a true Muslim friend."

"I have no one to speak too [sic]," read a posting from January 2005, when Umar Farouk Abdulmutallab was attending boarding school. "No one to consult, no one to support me and I feel depressed and lonely. I do not know what to do. And then I think this loneliness leads me to other problems."

The Washington Post reviewed 300 online postings under the name "farouk1986" (a combination of Abdulmutallab's middle name and birth year). The postings mused openly about love and marriage, his college ambitions and angst over standardized testing, as well as his inner struggle as a devout Muslim between liberalism and extremism. In often-intimate writings, posted between 2005 and 2007, he sought friends online, through Facebook and in Islamic chat rooms: "My name is Umar but you can call me Farouk." He often invited readers to "have your say" and once wrote, "May Allah reward you for reading and reward you more for helping."

A U.S. government official said late Monday that federal intelligence officials were reviewing the online postings but had not independently confirmed their authenticity. WaPo

What makes a terrorist? It's not poverty. It seems Al Qaeda gave Farouk the validation that he so obviously needed. (WaPo says Farouk's postings are here) The media is talking a lot about how people become "radicalized," which sounds like a complicated process. But in reality, it doesn't seem to be. Radicalization seems to be misinterpreting a religion. I'm just thinking out lout at this point. NYU Professor Irshad Manji: