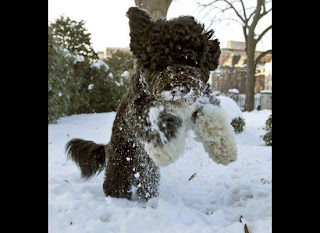 Bo has nothing to do with healthcare. Or does he? But he's so cute.
Obama says some on the left ignoring the reality of this legislation:

"This notion, I know, among some on the left that somehow this bill is not everything that it should be -- that we still need a single-payer plan ... just ignores the real human reality that this will help millions of people and end up being the most significant piece of domestic legislation at least since Medicare and maybe since Social Security."

Obama has an interview today with Jim Lehrer as well.
Posted by Olga at 1:21 PM