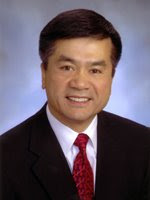 This guy has to be squeaky clean -- no tax trouble, no undocumented nannies. Locke is a democrat.

President Barack Obama's likely third pick for Commerce secretary is former Washington Gov. Gary Locke, a senior administration official said Monday.
Locke was the nation's first Chinese-American governor when he served two terms in the Washington statehouse from 1997 to 2005.
Obama's expected choice of Locke arose less than two weeks after his most recent pick, Republican Sen. Judd Gregg of New Hampshire, backed out. Just over a week after Obama named him and he accepted, Gregg cited "irresolvable conflicts" with the policies of the Democratic president.
The official spoke on condition of anonymity because the announcement has not yet been made. AP

Gary was elected Washington’s 21st governor on November 5, 1996, making him the first Chinese American governor in U.S. history. On November 7, 2000, Gary, a Democrat, was reelected to his second term by an overwhelming margin.
As governor, he worked to make Washington a better place to live, work and raise a family by dramatically raising academic achievement in the public schools; strengthening the state’s economy, improving transportation, expanding health care to vulnerable children and adults, and making the state government more accessible and user-friendly.
Gary’s organizational and managerial accomplishments have been recognized by Governing Magazine as one of America’s five best managed states, as a finalist in the Harvard Innovations in Government program, and as the most Digital State Government.
King County Executive, 1994-1997