It's Official: Kathleen Sebelius for Health and Human Services 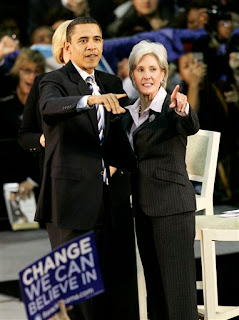 I'd say Obama has a rather awesome cabinet.
There was buzz about Kansas Governor Kathleen Sebelius mid-February, now it's official.

Obama's first choice for HHS, former Senate Majority Leader Tom Daschle, withdrew after disclosing he had failed to pay $140,000 in taxes and interest.

Sebelius was an early Obama supporter. Many thought she might be chosen for VP. Here is her bio.
Sebelius' views on healthcare issues.
Posted by Olga at 3:03 PM