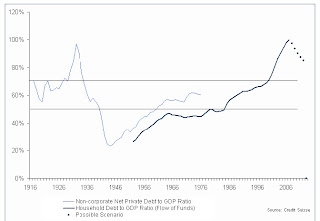 Former banker and professor David Beim says the real problem with the economy is that we over borrowed. I think we all realize that. He says that household debt is now 100% of gross domestic product (the measure of all of our goods and services). It's usually 50% of GDP.
Some say GDP is over rated. But if we're going to listen to Beim, he says the only other time in history that was the case was 1929. Perhaps this is why banks aren't lending -- because there are few people left who are worthy of a loan. People are up to their eyeballs in debt.

Planet Money: He has a chart illustrating how much debt American citizens owe, how much we all owe — with our mortgages and credit cards — compared with the economy as a whole. For most of American history, that consumer debt level represented less than 50 percent of the total U.S. economy, as measured by gross domestic product.

This has happened before. The chart shows two peaks when consumer debt levels equaled the GDP: One occurred in 2007, the other in 1929.

And that scares Beim.

We have overborrowed, Beim says: "We've been living very high on the hog.

Beim also says that there is no solution that will punish only those who over borrowed. All of us will have to suffer. He says lending more money is not the answer but he doesn't suggest any solutions. Everyone predicts doom and gloom and throws tomatoes at Obama for his multi-pronged strategy, but no one actually presents a solution. At least the republicans are consistent -- tax breaks. I'm not sure that's the answer but it would be nice to live in a parallel world where we could try both. Beim does say that the federal government needs to buy up all of the banks' bad assets, sooner rather than later. It seems we all just need to get used to living without borrowing so much. If we need a car, we should save a big down payment or buy a used car. If we want a house, we should put down at least 20%. We should pay off our credit card balances every month. We shouldn't go back to the way it was. It would also be nice if the very wealthy (who really are the winners in terms of how little they will need to sacrifice compared to everyone else) would trickle down some of that money to their workforce instead of hording it in overseas bank accounts and paying exorbitant salaries to executives. Obama's "redistribution of wealth" (that's right all the Joe the Plumbers out there) should be a help in creating a more equitable tax system. Reforming healthcare and education will go a long way toward a more stable economy in the future. The stimulus should plug some holes. But who really knows what the answers are. I think the one thing we've learned is that there really is no such thing as an expert.
These were the good ol' days when Lending Tree would lend you money to pay off your debt. I'll bet they made themselves a fortune for a while.