Obama Has More to Worry About Than Trolls Under the Bridge 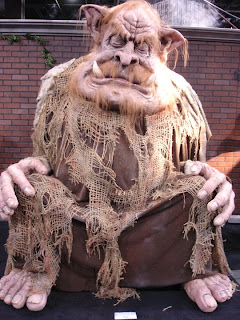 Trolls under the bridge is how Chris Matthews described republican antics. Frank Rich describes how serious our problems are and the sense of denial we have, despite.

I don't think any of us in "real America," to borrow a phrase from the republicans, are in denial. Just those who tried to keep up with the Joneses. Those of us in real America watched our neighbors pile on debt and we had to struggle against the temptation to do the same.

Ultimately, we knew it was a house of cards but we couldn't do anything about it except work, save what we could and watch. What we didn't know is that our neighbors' practice of keeping up with the Joneses would also bring us down -- our home values (many of us resisted the easy bake home), our 401Ks, our jobs. Now, as pointed out by Ranting Rick Santelli, many people are livid.

But the fact is, we have to prop up the debtors and those who didn't know any better -- we are a nation in need of financial literacy training --  for the sake of the whole.

NYT: No one knows, of course, but a bigger question may be whether we really want to know. One of the most persistent cultural tics of the early 21st century is Americans’ reluctance to absorb, let alone prepare for, bad news. We are plugged into more information sources than anyone could have imagined even 15 years ago. The cruel ambush of 9/11 supposedly “changed everything,” slapping us back to reality. Yet we are constantly shocked, shocked by the foreseeable. Obama’s toughest political problem may not be coping with the increasingly marginalized G.O.P. but with an America-in-denial that must hear warning signs repeatedly, for months and sometimes years, before believing the wolf is actually at the door.

This phenomenon could be seen in two TV exposés of the mortgage crisis broadcast on the eve of the stimulus signing. On Sunday, “60 Minutes” focused on the tawdry lending practices of Golden West Financial, built by Herb and Marion Sandler. On Monday, the CNBC documentary “House of Cards” served up another tranche of the subprime culture, typified by the now defunct company Quick Loan Funding and its huckster-in-chief, Daniel Sadek. Both reports were superbly done, but both could have been reruns.

Pity our new president. As he rolls out one recovery package after another, he can’t know for sure what will work. If he tells the whole story of what might be around the corner, he risks instilling fear itself among Americans who are already panicked. (Half the country, according to a new Associated Press poll, now fears unemployment.) But if the president airbrushes the picture too much, the country could be as angry about ensuing calamities as it was when the Bush administration’s repeated assertion of “success” in Iraq proved a sham. Managing America’s future shock is a task that will call for every last ounce of Obama’s brains, temperament and oratorical gifts.

The difficulty of walking this fine line can be seen in the drama surrounding the latest forbidden word to creep around the shadows for months before finally leaping into the open: nationalization. Until he started hedging a little last weekend, the president has pointedly said that nationalizing banks, while fine for Sweden, wouldn’t do in America, with its “different” (i.e., non-socialistic) culture and traditions. But the word nationalization, once mostly whispered by liberal economists, is now even being tossed around by Lindsey Graham and Alan Greenspan. It’s a clear indication that no one has a better idea. Read the rest.