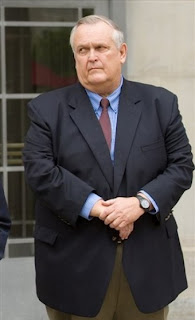 Don't even think about misspending the stimulus! Go Earl!

Mr. Obama is set to announce his selection of the former agent, Earl Devaney, on Monday at a meeting with governors at the White House. Mr. Devaney will serve as the chairman of the new Recovery Act Transparency and Accountability Board and, along with Vice President Joseph R. Biden Jr., will coordinate oversight of stimulus spending.

Mr. Devaney, the inspector general of the Interior Department, helped turn up dealings at the department involving the disgraced lobbyist Jack Abramoff.

Mr. Devaney was a senior official with the Secret Service before retiring in 1991. He then worked as the chief of criminal enforcement at the Environmental Protection Agency.