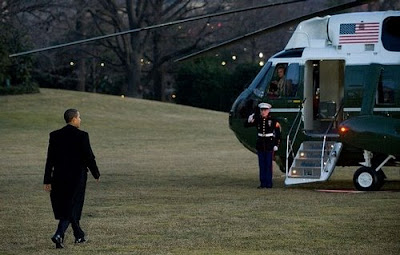 Yesterday McCain held up Marine One as an example of government waste. Obama agreed (see video). He joked with McCain that the helicopter he had seemed good enough, even though Lockheed Martin is building 28 new ones.

Military analysts say Obama needs the new copters because the 19 (why are they building 28?) that he has now are old and don't have the protection or the communications that they need.

I'd buy that he might need a slightly updated helicopter, and he might need a handful for his travel and the travel of other top officials. But 28? With crazy bells and whistles? B.S.

AP: The existing 19 helicopters built by United Technologies Corp.'s Sikorsky Aircraft are more than 30 years old, and several have broken down on presidential trips. But most worrisome is that the current fleet does not meet the communication and protection needs of the White House, according to military analysts.

They would say that because that's the way procurement works -- soak the government for as much money as possible. EVERYONE knows that's the way it is. Look at Halliburton. Look at what contractors did in Iraq, built things for billions that didn't even work.

In fact, this is George Bush's type of Porkulus, to borrow a term from Limbaugh.

Notice in this bit that Thompson's client is Lockheed. The fact that he's not lobbying for Lockheed on this particular project makes no difference in his bias:

But Loren Thompson, a defense consultant for the Lexington Institute in Virginia, disagrees. The current presidential helicopter is "dangerously outdated," he said.
Thompson's clients include Lockheed Martin Corp., the prime contractor on the new helicopters, though he is not working for the company on the program.

Cost overruns and delays have plagued Lockheed's helicopter program due partly to aggressive plans by the Bush administration to incorporate anti-missile defenses, communications equipment, hardened hulls and other advanced capabilities on the aircraft following the 9/11 terrorist attacks.
Analysts say those efforts — which have inflated the cost of the fleet of 28 new Marine One helicopters — have not been wasted. "You can't lose the president of the United States," McAleese said. "This aircraft only has one purpose and that is to protect the president."
But the new fleet — with a price tag of $11.2 billion that is nearly double the original budget-- will cost more than Air Force One.

Obama may not have a choice?

Wayne Plucker, a senior aerospace analyst for Frost and Sullivan, said it would be difficult to cancel the entire helicopter program because of the political implications.
But Sen. Carl Levin, D-Mich., said the Pentagon "can't just send a boiler plate certification."
"They're going to have to go through the kind of a financial assessment that they do when they start up a weapons system," the chairman of Senate Armed Services Committee told reporters Tuesday.
Levin and Sen. John McCain, R-Ariz., introduced a bill Tuesday to prevent cost overruns and schedule delays in many Pentagon weapons programs.

The fact that Levin and McCain introduced a bill today means that Obama might've known that McCain's helicopter question was coming.
Posted by Olga at 4:12 PM