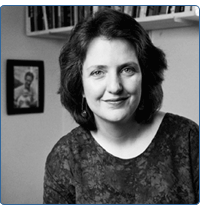 Merrigan, tapped for deputy secretary of Agriculture, was head of USDA's Agricultural Marketing Service from 1999-2001 during the Clinton era and helped develop USDA's rules on what can be sold as organic food. As a Senate aide, she worked on the 1990 law that recognized organic farming.

"Sustainable and organic farmers are excited ... that someone who has been associated with these issues her whole career is going to be at that level in the department," said Ferd Hoefner of the National Sustainable Agriculture Coalition.

Hoefner encouraged the Senate to confirm Merrigan for the post.

A 2004 story written by Merrigan.
Bio at Tufts:

She earned a Ph.D. in urban and environmental planning from MIT and a master's degree in public affairs from the Lyndon B. Johnson School of Public Affairs. She comes to Tufts from the U.S. Department of Agriculture, where most recently, she was administrator of the Agricultural Marketing Service.

Merrigan has worked on a wide range of agricultural and food policy issues, including the development of the federal standard for organic food, and on matters related to biotechnology, sustainable agriculture, agricultural research and extension, pesticides, animal and plant health and agricultural appropriations. She currently serves on the advisory board for the Pew Initiative on Biotechnology. Prior to her appointment at the USDA, she was a policy analyst at the Wallace Institute for Alternative Agriculture.

Merrigan's international experience includes work on organic agriculture with the Food and Agriculture Organization of the United Nations; with the Water Policy Institute of the Polytechnic University of Krakow on pesticides; and with the Netherlands Ministry of the Environment. She has written extensively on sustainable agriculture policy in the United States and is frequently invited to give congressional testimony on agriculture and environmental issues.

Other nominations:
Ashton Carter for Under Secretary of Defense for Acquisition.

Tom Strickland for assistant secretary for fish and wildlife and parks at the Department of the Interior.
Posted by Olga at 4:16 PM