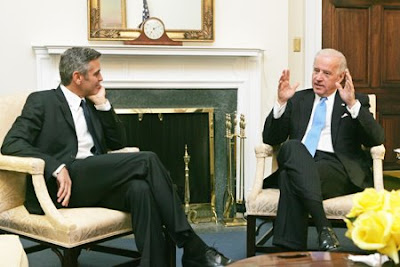 I tend to dismiss most actor/activists, but Clooney is credible. He says we need someone working everyday in Darfur to bring peace.

Politico: Actor George Clooney emerged from an Oval Office meeting with President Barack Obama Monday night to say the White House will appoint an envoy to Darfur, the Sudanese region ravaged by war and famine.

“They said they would appoint a full-time, high-level envoy that would report directly to the White House,” Clooney told reporters. "This would be a huge policy step."

Of the Obama administration's commitment to Darfur, Clooney said, "It's good to hear because there was some concern that this could fall off the radar."

The White House didn’t respond immediately to a request for comment on Clooney’s remarks — which amounted to a highly unconventional, and seemingly ad-hoc way of revealing Obama’s thinking about such a key foreign policy decision.

Clooney, who has traveled to the region repeatedly, said the administration “assured me that Darfur is one of a small handful of foreign policy reviews being taken at the senior-most level.”

In separate meetings with Obama, then Vice President Joe Biden, Clooney asked them to make Darfur one of their top priorities and to appoint an envoy. "They assured me and wanted me to assure the rest of whoever it is that is listening that this is high on their agenda," Clooney said.

Clooney has been at this for a long time: