Obama Gears Up to Overhaul Healthcare 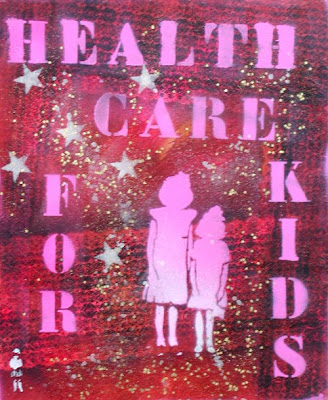 Ms. Pepette's painting
Good news people.
Paul Krugman says $634 billion has been designated for healthcare reform, not quite enough but a good start.

CQ Politics: While the Obama administration and congressional Democrats are poised to press ahead with a sweeping health care overhaul, they are having to do it without some of the key players they hoped would be leading the charge.

President Obama spoke about a health care overhaul this week as part of a broader message on fiscal stability. Next week he will continue the drive with a White House summit focused on health care that will include key members of Congress.

“The cost of health care eats up more and more of our savings each year, yet we keep delaying reform,” Obama said in his address to Congress on Tuesday. “Health care reform cannot wait, it must not wait, and it will not wait another year.”

Obama said his budget, to be outlined later this week, would include a “down payment” on his health overhaul plans. But he also acknowledged the political difficulties and past failures of overhaul efforts.

But while Obama appears ready to move, it’s not clear that all the pieces are on the board. Now that former Sen. Tom Daschle, D-S.D. (1987-2005), has withdrawn his nomination, Obama still has no Health and Human Services secretary, nor even a nominee. And his new White House Office of Health Reform, intended to manage overhaul efforts, has no official leader. Other key agencies, such as the Food and Drug Administration and the Centers for Medicare and Medicaid Services, also have no nominee.

I don't understand why can't Daschle be an advisor and work hand in hand with whomever is selected for Health and Human Services.
How is Obama going to pay for healthcare reform?

NYT: Administration officials said the president would seek in the budget he releases on Thursday to cap itemized tax deductions for high-income people, such as couples earning more than about $250,000 a year.

The officials said the resulting revenues would account for about half of a $634 billion “reserve fund” that Mr. Obama will set aside in his budget to begin addressing health care. The other half would come from Medicare savings, including an end to billions of dollars in subsidies to insurance companies under the Medicare Advantage program, and other possible tax-law changes.

Already the naysayers are saying Obama can't work on the economy and healthcare at the same time. To all the people who say Obama is too ambitious, I say bah! This is a man who swooped onto the scene and became president against some serious odds. This is a man serious about change. It's never been just a campaign slogan.

This is a man seriously underestimated ever since people started yakking about him. He's too young. Blah Blah. He's too black. Blah Blah. He's too inexperienced. Blah Blah. And they still drone on and on. You'd think by now people would realize that Obama is seriously ambitious for all the right reasons. He's a natural leader, who's been able to attract the best people to government.

And one other thing, a goal never set is a goal never achieved. Duh. At least he's setting goals. I can't remember George Bush expressing a goal that he wanted to achieve.
Posted by Olga at 5:07 PM