Obama to Rahm: I'm Coming for You 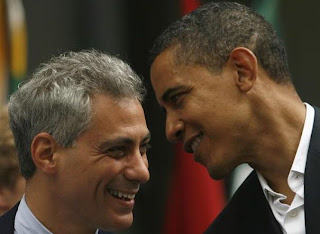 Obama's chief of staff Rahm Emanuel has a big spread in the New Yorker. This part made me chuckle:

Obama settled on Emanuel as early as last August. “It was months before the election when Barack said to me, ‘You know, Rahm would make a great chief of staff,’ ” Axelrod said. “He spent six years in the White House, knows this place inside and out, spent four or five years in Congress, and became a leader in a short period of time. He really understands the legislative process, he’s a friend who the President has known for a long time from Chicago, and whose loyalty is beyond question, and who thinks like a Chicagoan.”
Emanuel did not want the job. A few months before Election Day, Obama sent him an e-mail, with a warning: “Heads up, I’m coming for you.” Emanuel was a key negotiator in moving the TARP legislation through Congress, in October. After the bill cleared Congress, Obama, who supported it, sent Emanuel another e-mail. “I told you we made a great team,” he said. Emanuel wrote back, “I look forward to being your floor leader in the House.”
While Obama was wooing Rahm, Rahm’s older brother, Ezekiel, an oncologist and a bioethicist, served as a sounding board. “I probably spent half an hour every day being screamed at on the telephone by him,” he said. “ ‘I don’t want to do this. Why do I have to do this? Tell me I don’t have to do this.’ All of which said to me he knew he had to do it.” (Ezekiel told me that the rivalry among himself, Rahm, and their third brother, Ariel, a Hollywood agent who is the basis for the Ari Gold character on HBO’s “Entourage,” was so intense that they had to pursue careers in different cities. “We couldn’t possibly be within a thousand miles of each other, because the force fields just wouldn’t let it happen,” Ezekiel said. Rahm is now his boss; he works at the White House as an adviser to the budget director on health policy.) Read it all

Rahm has a fascinating family history:

manuel grew up in a political family. His Israeli-born father, Benjamin, was a member of the Irgun, a militant Zionist group from which the modern Likud Party eventually emerged. His mother, Marsha, was a civil-rights activist who was arrested several times. “We were attacked because we were white Jews with African-Americans,” Ezekiel said. When Martin Luther King, Jr., marched in Chicago in 1966, and was pelted with eggs, Marsha and her children marched along with him. Ezekiel told me that he knew Rahm would take the job of chief of staff because of Marsha’s father, Herman Smulivitz, a boxer and a union organizer. It was Herman who instilled in Rahm a commitment to service, and Rahm was particularly close to him.
When I asked Rahm about his grandfather, his eyes welled up with tears. “I’m a little too tired, a little too stressed,” he said. “It’s too emotional about Gramp.” He poured himself a glass of water and took a sip. Earlier, he had explained his decision in pragmatic terms: “If you got into public life to affect policy, and to affect the direction of the country, where could you do that on the most immediate basis? Everybody knows: chief of staff.”