Banks To Get Tested For Stress 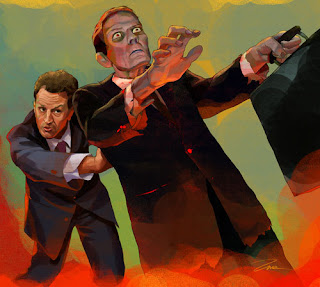 NYT: The Obama administration will begin taking a hard look at the financial condition of the country’s 20 biggest banks this week to judge whether they could hold up even if the downturn worsens further than policy makers already expect.

These reviews of the banks’ books, known as “stress tests,” are heightening a dilemma for Obama aides about how candid they should be about the health of banks like Citigroup and Bank of America. The tests are expected to take several weeks.

Bank shares were pummeled last week, partly because of rumors that the government might nationalize some of the banks. Officials consider many of the top 20 banks “too big to fail.”

The tests come as anxiety is building among investors and industry analysts about the Treasury Department’s broader plan to shore up the banking system. People familiar with the plan, which has been criticized by executives and analysts as vague, say its crucial details may not be ready for another few weeks.

If they're about to keel over, then... just don't say nationalization:

Top advisers to President Obama, including the Treasury secretary, Timothy F. Geithner, have insisted repeatedly that they want to keep the major banks in “private hands” and have no intention of nationalizing them. But because the tests involve nightmarish economic conditions, the results of the tests are likely to strengthen the case that some of the major banks need more capital. That would increase the likelihood that the government would increase its stake and dilute or even wipe out the shares held by private investors.

Citigroup is in talks for... just don't say nationalization... but that's what it is when the government takes a larger stake. Fire the bums!
The lessons from Sweden.
There are a lot of myths about nationalization.
What Sweden's nationalization wasn't.
Posted by Olga at 9:36 PM