Obama Will Swear in on Lincoln Bible 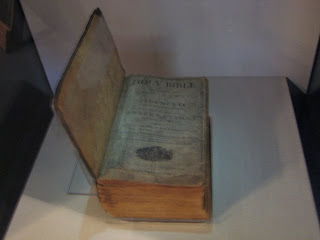 Abe's Bible (see more photos here)
28 days til inauguration!
Obama will swear in using his full name and the same Bible that Lincoln used. Chief Justice of the United States, The Honorable John G. Roberts, Jr. will do the swearing.

Politico: The Presidential Inaugural Committee announces: 'President-elect Barack Obama will take the oath of office using the same Bible upon which President Lincoln was sworn in at his first inauguration. The Bible is currently part of the collections of the Library of Congress. Though there is no constitutional requirement for the use of a Bible during the swearing-in, Presidents have traditionally used Bibles for the ceremony, choosing a volume with personal or historical significance. President-elect Obama will be the first President sworn in using the Lincoln Bible since its initial use in 1861. ... The Lincoln Bible will be available for a press viewing ... today.'

How Lincoln swore in:

With the brief words, "I, Abraham Lincoln, do solemnly swear that I will faithfully execute the Office of President of the United States, and will to the best of my Ability, preserve, protect and defend the Constitution of the United States" Lincoln was sworn in as the sixteenth president. The ceremony was witnessed by Clerk of the Supreme Court, William Thomas Carroll, who recorded the occasion in the back of this Bible.

The Lincoln Bible will be part of an upcoming exhibit:

You can see the Lincoln Inaugural Bible up close at the Library of Congress from February 12 to May 9, 2009, as part of an exhibition called “With Malice Toward None: The Abraham Lincoln Bicentennial Exhibition.” If you miss your chance to see the exhibit in Washington, you may be able to catch a glimpse of the Bible as it travels to five other cities in celebration of the 200th anniversary of the birth of our 16th president.

Will Obama swear in on a certain Bible passage?
Posted by Olga at 7:18 AM