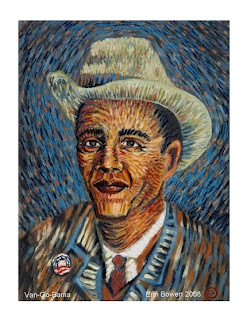 Van Go Bama
Business is good for those selling Obama souvenirs. Some of the best Obama bilia are art posters and stickers. Those can be seen here. There's also bunches of handmade jewelry, buttons, inaugural note cards and other things here.
In DC, they're making a killing:

CQ Politics: Abner Richet, a social work student at the University of Washington in Seattle, had been on his first visit to the nation’s capital for only a few hours before he started shopping for souvenirs marking the upcoming inauguration of President-elect Barack Obama.

“It was a historical moment for me when I got here,” Richet said, as he stood in a 5,000-square-foot all-Obama souvenir shop that has opened at 15th Street and Pennsylvania Avenue N.W., just a block away from the White House. He proudly showed off his first purchase, a $3 montage poster of Obama and his family. “It’s for my mother. She’s a huge Obama fan,” said Richet, whose family lives in Fort Lauderdale, Fla.

Such shopping excursions are fueling a mini-boom in the Washington souvenir trade, keyed to the election of Obama and his Jan. 20 inauguration, which is expected to draw record crowds to Washington.

Already, the street vendors who set up shop on downtown Washington sidewalks have pushed aside the T-shirts and hats emblazoned with “FBI” or “CIA” to make way for Obama T-shirts, hats and sweatshirts. It’s practically impossible to find any souvenir with the likeness of departing President Bush. In the souvenir world, he’s yesterday’s news.

Everyone is getting in on it:

The interest in cashing in on Obama is spreading. The Borders bookstore in downtown Washington features a big window display of books by and about Obama, and chain stores like Walgreens and CVS also are selling Obama hats and shirts. For the upmarket trade, jewelers are planning Obama bracelets, pendants or earrings, with prices reaching four figures.