No One As Irish as Barack O'Bama 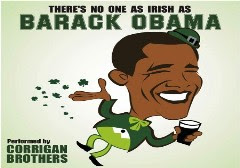 Love this!
A song for Obama by the Irish band the Corrigan Brothers, who (Political Punch reports) have been invited to play on inauguration day. Here's what the Irish Times says:

The Corrigan Brothers have been invited by the Irish American Democrats to perform at their inauguration night dinner in Washington on January 19th. Hillary Clinton is expected to attend. "The Irish American Fund also asked us to play it as his cavalcade passes on inauguration day," he said.

You can download the song here.
Here it is. It's catchy:

You don't believe me, I hear you say
But Barack's as Irish, as was JFK
His granddaddy's daddy came from Moneygall
A small Irish village, well known to you all

He's as Irish as bacon and cabbage and stew
He's Hawaiian he's Kenyan American too
He’s in the white house, He took his chance
Now let’s see Barack do Riverdance

2008 the white house is green, their cheering in Mayo and in Skibereen.
The Irish in Kenya, and in Yokahama,
Are cheering for President Barack O’Bama

O'Leary, O'Reilly, O'Hare and O'Hara
There's no one as Irish as Barack O'Bama

The Hockey Moms gone, and so is McCain
They are cheering in Texas and in Borrisokane,

From the Irish Times:

MILLIONS OF viewers have heard it on YouTube, RTÉ, BBC and MSNBC in recent weeks. It has graced the pages of the Los Angeles Times and Newsweek .

And yesterday, Universal Music released There's No One As Irish As Barack Obama , the first single by the artists formerly known as Hardy Drew and the Nancy Boys.

For the Tipperary band, renamed the Corrigan Brothers, due to problems searching their former site on the internet, the "change" brought about by the Democrat's election has been "phenomenal".

Their tongue-in-cheek ditty, based on the president-elect's roots in Moneygall, Co Offaly, has generated interest from Kansas to Kyoto and a two-album deal placing them on the same label as Sting and The Rolling Stones.

"We got lucky with it. It has captured the imagination and the fact he got elected was a great help," said lead singer Ger Corrigan. "We didn't have a song about John McCain ready."

Ger (43) and his brothers Brian (36) and Donncha (35), veterans of a number of rock and folk groups over the past 20 years, wrote the song in February "just for the fun of it" when news of Mr Obama's Irish ancestry emerged.

The song was released initially on YouTube, but only 25 people viewed it in its first month. However, as the presidential race hotted up, the song was noticed by media organisations across the world, eager to hear why Mr Obama was "as Irish as bacon and cabbage".