Obama Visits Marine Base on Christmas 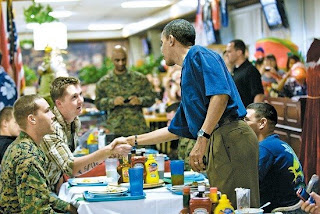 KANE'OHE BAY — Before sitting down to his own Christmas dinner yesterday, President-elect Barack Obama spent about an hour shaking hands and taking pictures with more than 100 Marines and sailors gathered for a Christmas Day meal.

"I just wanted to say 'Hi,' " Obama said to service members, shortly after walking into Anderson Hall at Marine Corps Base Hawai'i, where mostly single Marines and sailors had convened for a Christmas feast of ham, turkey, mashed potatoes and other holiday favorites.

Obama, wearing a blue short-sleeved shirt and dark slacks, walked from table to table greeting people, many of whom stood up to shake the president-elect's hand, snap a photo with him or grab an autograph.

Obama thanked the Marines and sailors for their service and wished them a "Merry Christmas." He also exchanged small talk with a few. "How's everyone?" he asked one table of four. "You guys have a good one," he told another.

Linh Tran, a cook for Anderson Hall who helped prepare the holiday meal for the service members, said he was delighted that Obama stopped by. "I'm impressed," said Tran, adding he never thought he'd get to see Obama up close. "I voted for him. I like him."

Obama didn't make any formal remarks or talk to reporters during the stop.

See a bunch of Obama Hawaii photos here.
Politico's report on the visit:

on the President-elect's visit to a military base in Kailua, Hawaii, from Politico's Carol E. Lee: 'President-elect Barack Obama spent nearly an hour and 15 minutes greeting Marine and Navy service men and women as they ate Christmas dinner at the mess hall at Marine Corps Base Hawaii Kaneohe Bay. ... Obama's motorcade arrived at Anderson Hall on the base at 4:04 p.m. Three men in uniform outside were outside. They each stood at attention and saluted the president-elect. Obama spent a few minutes in the lobby before entering the mess hall at 4:08 p.m. He first greeted the man at a cash register, shaking his hand. Obama worked a section of the room with about 25 tables where troops and their families were eating Christmas dinner. Reporters were allowed inside the mess hall for 7 of the 68 minutes Obama spent greeting service men and women.

'The diners represented seven military units – Marine and Navy – and some of them were joined by their families ... Obama worked the left side of the room after he walked in. 'Hey, guys,' he said, shaking hands to men who appeared to be in their early 20s at most. 'Good to see you, man,' Obama said. 'Thanks for your service,' he said. 'Hey, guys,' Obama said. 'Where are you from?' The service men and women rose to their feet when Obama approached their tables and extended his hand. The president-elect took his time and did not appear rushed. He stopped to talk for as long as a minute with some tables, sometimes nodding and placing his hands on his hips. He posed for photos with them. ... The president-elect put his hand on one man's shoulder. He laughed a couple of times. ...

'Obama greeted a table of four young men. One of them had a newspaper clipping for him to sign. The president-elect must have asked where they're from because he said, 'So this is the East Coast table,' as he shook one of their hands and put his hand on his shoulder. The service men and women seemed to enjoy having the president-elect there. Some appeared to be sending text messages from their cell phones when it was clear he was about to enter the room. 'Congratulations,' one of the service members said as Obama greeted his table. 'I appreciate all you service guys,' Obama said to others. Obama did not acknowledge the gaggle of reporters clustered behind a rope-line to his left. ... Obama wore dark khaki slacks and a short-sleeve blue button-down shirt. ... Obama exited Anderson Hall at 5:16 p.m. local time speaking with two men in uniform. He waved to the people who had gathered and said, 'Hello,' before getting into his SUV. Obama's motorcade arrived back at his vacation home at 5:28 p.m. We have a lid for the night.'

Today Obama took the kids out for slush and tries, once again, to buy shaved ice for the reporters. Ah, such good journalists, they've turned down beer and slush:

HA: Obama entered Koko Marina Paradise Deli and said, "So, what are we going to get?" "Let me get a tuna sandwich," Obama said, asking for it on 12-grain bread, tomatoes and no mayo.

"Actually, can you melt cheese on that?" he asked. "Can you make like a tuna melt with cheddar cheese?"

Obama then approached the press pool to say hello. He placed his shoulder on this reporter, who was scribbling notes, and said, "You don't really need to write all that down."

Then Obama walked with Sasha, who was wearing a purple, yellow and white dress, to Kokonuts Shave Ice & Snacks. There were dozens of onlookers swarming the crowded parking lot snapping pictures and saying hello. Obama waved and said "Hi, Merry Christmas."

At one point on the sidewalk, Obama dropped his sunglasses, bent down and picked then up.

Obama ate his sandwich before his shave ice, saying he wanted to set a good example for his girls by eating healthy food before dessert.

Inside Kokonuts, Obama, with his Blackberry on left hip, ordered shave ice for the kids and friends.