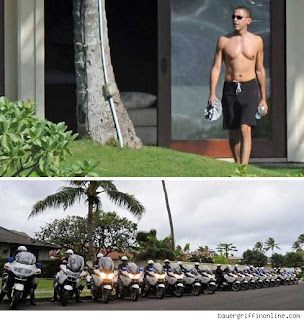 The UK has a funny photo spread on world leaders in swim trunks.
Obama has caused a stir with this shirtless photo. Our prez is fit fit fit and fine fine fine, as a few folks on Twitter have pointed out.

Daily Mail: Several world leaders have tried in recent years to impress the crowds with a topless holiday shoot - with varying degrees of success.

Vladimir Putin became a sex symbol in Russia after he was pictured stripped down to the waist in the summer in Siberia.

French president Nicolas Sarkozy had a tougher time after he was snapped bare-chested in a canoe in New Hampshire.

The picture was air-brushed to make him appear more svelte.

David Cameron has tried to get in on the act, while bodyboarding in South Africa.

And Bill Clinton appeared in his trunks while in Honolulu in 1993 - but his figure wasn't a patch on Mr Obama's.

Mr Obama, 47, who takes office next month, is a fitness fanatic and refused to give up his daily workouts even during the heat of the campaign.