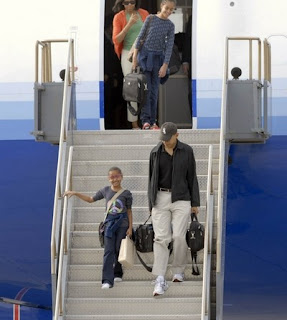 Video of the Obama family's (and a horde of other people) arrival.  He's there for 10 days. Local school kids make leis of paper pledges.
This morning, Barack and Michelle got in a workout and Obama saluted a few Marines:

HA: President-elect Barack Obama and his wife Michelle Obama, with iPod and headphones in hand and both wearing gym clothes, left their vacation rental home at Kailuana Place in Kailua at 7:15 today for a 45-minute workout at the Semper Fit Center on the Kaneohe Marine Corps Base Hawaii.

The Marine base had little activity as the Obamas' motorcade headed to the gym.

Honolulu Advertiser: Residents of Kailuana Place lined their block with beach chairs and waved to Obama's black Cadillac limousine as it — and Obama's motorcade of Secret Service agents, about 30 Honolulu police motorcycle officers, patrol cars and a bus full of White House media — pulled up to the beach-side estate of three homes where Obama and his family are expected to stay through the holidays.

Kailuana Place, on the Aikahi end of Kailua Bay near Marine Corps Base Hawai'i, suddenly turned into an impromptu block party for the arrival of a native son who will be sworn in as America's 44th president on Jan. 20.

David and Linda Oifer even set out a bowl of chips and dip as neighbors sat in the Oifers' beach chairs to watch all of the law enforcement activity and the strangers who continually drove up and down their street asking a simple question: "Obama?"

"Look at all the lookee-loos," Ember Shinn said from across the street.

Ember and her husband, Alan, hope to see the Obamas on the beach or in their neighborhood in the next few days and were happy he and his family will get to enjoy a Hawai'i Christmas.

"We want him to have a good, restful vacation because he has a big job ahead of him in Washington, D.C.," Alan Shinn said.

Obama's chartered United Airlines 767-300I jet touched down at Honolulu International Airport at 3:06 p.m. yesterday after a flight from Chicago.