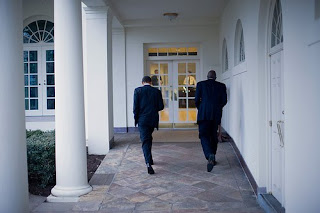 Politico wrote a SEVEN page story on why the White House press doesn't like the White House. Did anyone in the mainstream media write a seven page story explaining healthcare?
I think Politico is sulking because the media apparently was "shooed" to the parking lot yesterday, while someone from the White House video taped Obama at Jerry's.
Again, if the press did its job the correct way, it would probably get more access. When healthcare was being debated, we got tea party coverage, death panels and Sarah Palin. I know more about the tea party than I do about anything else. What about Afghanistan? Where is the reporting on that?
I have yet to see someone in the mainstream press define what's in the financial reforms legislation. They'd rather cover the politics and the game playing than the substance. So they let the politicians characterize what's in the bill.
If you ask me, the media need to stop complaining and take a look at the job it's doing and try and do better. No one ever looks good when they're whining. It's not constructive to gripe via story.
The Obama administration is doing its job in trying to keep the press on topic.
I actually think Politico does a pretty good job as far as covering Obama's day to day schedule. But this is the second story Politico has written on this topic in recent weeks. Recently, Chuck Todd was complaining to Joe Scarborough about the White House's "grumpiness" to the press.

Obama and the media actually have a surprisingly hostile relationship — as contentious on a day-to-day basis as any between press and president in the past decade, reporters who cover the White House say.
Reporters say the White House is thin-skinned, controlling, eager to go over their heads and stingy with even basic information. All White Houses try to control the message. But this White House has pledged to be more open than its predecessors, and reporters feel it doesn’t live up to that pledge in several key areas: Read more at Politico

But Gibbs is unapologetic about sometimes taking a hard line in his dealings with the press, saying it’s a response to the viral nature of modern media.

“There’s a danger in letting something go. Trust me, I read a lot of news every day. Not a day goes by that something that I didn’t pay enough attention to, or close attention to, doesn’t go from being myth to reality over the course of several hours,” Gibbs told POLITICO.

“I understand if you’re a reporter and get 95 percent right, and your word choice isn’t right on 5 percent. But that 5 percent goes on to become reality. I’ve got to live with that, when it may or may not be true,” Gibbs said. “It does make our jobs difficult.”

If you cover City Hall, you talk to the mayor. If you cover the Yankees, you’ll hang around Derek Jeter’s locker. The White House is no different, and aides past routinely filled that need by letting the press pool toss the president a couple of questions every so often, usually at one of the various events that fill his calendar every day.

Not Obama. He has severely cut back the informal exchanges with the press pool, marking a new low in presidential access.