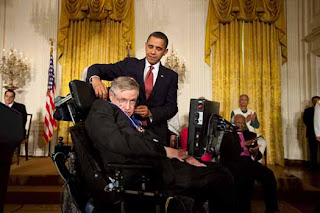 Obama awards Hawking a Medal of Freedom
This has nothing to do with politics, or does it?
Physicist Stephen Hawking says on his Discovery show that aliens will probably be like the aliens on V, wanting to colonize the planet and destroy us. But I've got to imagine that if there are other life forms out there, we're surely at the bottom as far as Universe rankings on intelligence, with intelligence defined as enlightened enough to live peacefully, because that's what real intelligence is. It's not developing the latest gadget or mapping the human genome, or being a whiz at physics, it's the ability to live the golden rule, to respect the planet and all that exists here. We're probably the bacteria of the Universe. So if we get a visit from aliens, seems to me it will be from life forms that are beyond our intelligence, peaceful, not another low-life life form like us.

Should we try to make contact with ET? Certainly not, says Steven Hawking, citing concerns that our Earthly resources would be plundered. "If aliens visit us, the outcome would be much as when Columbus landed in America, which didn't turn out well for the Native Americans," he said in a series broadcast on the Discovery Channel on Sunday.

Researchers have been debating whether to call or not to call for some time, and have come up with a measure called the San Marino scale to gauge the risk of broadcasting messages to space. New Scientist