Obama Golfs in Day 2 of His Weekend Getaway in Asheville 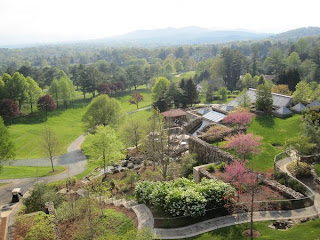 The view from the golf course
Update April 24: See day one here.
Tonight the Obamas and friends ate at the Corner Kitchen in Biltmore Village, according to the Citizen-Times.
Mark Knoller tweets: 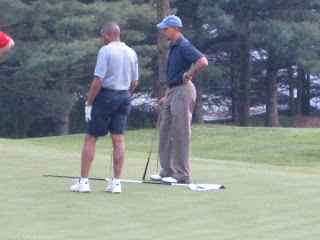 Twitpic from CBS WH reporter Mark Knoller
The photo below is of the Grove Park Spa, where Michelle probably is! Beautiful. Apparently, the Grove Park Inn is a honeymoon spot
Obama is golfing with his long-time friends Eric Whitaker Marvin Nicholson and Marty Nesbitt.

About 30 people gathered to watch Obama put his ball at the 7th hole and tee off at the 8th hole. Many were out for their morning walk or run, and knew something was going on when they saw the streets blocked by secret service and police cars. The spectators came in their pajamas and running clothes, with their dogs and cups of coffee.

Haley Gettinger, 13, lives in a house on the Grove Park Inn golf course. She had been looking for Obama since he arrived and was out at 7:45 Saturday morning looking for the president. Her persistence paid off with a chance to see him at the 7th and 8th holes.

"It was really exciting because I've never seen a president before and it's a once in a lifetime experience," she said.

Gettinger called her friend Millie Weeks to come over as soon as she found out the president would be golfing near her home. Weeks, also 13, arrived wearing a purple Obama T-shirt.

"It was really, really exciting," Weeks said. "I don't think I'm ever going to see him again and he talked to us."

After the eighth hole, Obama and his golf buddies were no longer in sight. Read more at the Asheville Citizen-Times blog, where they're dutifully blogging the Obamas' trip

A rundown of the Obama family trips. 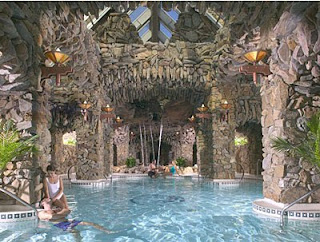 a long weekend back home in Chicago in February '09
a few days out west in August '09 during which the president went
fly-fishing in Montana & took the family to see Yellowstone and the Grand Canyon
eight days on Martha's Vineyard at the end of August '09
and a week and a half in Hawaii over last Christmas and New Year's
Their time away totals all or part of 26 days, not including 13 visits to Camp David totaling all or part of 30 days. 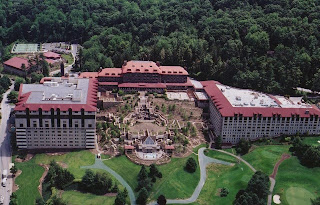 Michelle apparently played tennis while Obama golfed. Michelle talked about how the family is taking tennis lessons Thursday. Another anecdote from Citizen-Times:

Reader Meredith Stanley sent in a bunch of photos from Grove Park Inn as the president played golf today. She has a great anecdote from the 12th hole.

The president greeted everyone and a little girl shouted out, "You're the best president ever!"

After he finished teeing off, he brought her a golf ball with the presidential seal on it.