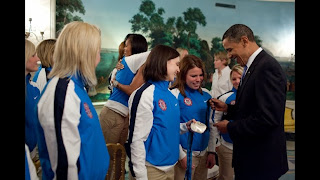 Without the filter of the media, here is a transcript of Obama's remarks yesterday aboard Air Force One:

Q Are you committed to pushing forward on immigration law this year?

THE PRESIDENT: Well, I’ve made calls to Republicans to see if we can get them to join us. This is a difficult issue. It generates a lot of emotions, and the politics are difficult. But I’ve been unwavering in saying what we need to do. I think that I can get a majority of Democrats to support a comprehensive approach. But I need some help on the Republican side. We had that kind of help a couple of years ago. Senator McCain was one of the leaders in that process. I gave him a lot of credit for it, and still do.

And so the question is, can we get some movement on that front? Lindsey Graham has been in serious conversations with Senator Schumer. I appreciate his courage on that. And my hope is, is that we can get a working group that can move this forward so that we’ve got serious legislation that solves the border problem and solves the wide range of issues that we face under immigration reform in a way that can garner the support of the American people.

You notice in the town hall meeting yesterday, those folks aren’t enthusiastic about illegal immigration. But when you lay it out for them, a sensible way of doing it, holding people who’ve broken the law responsible, securing our borders but also recognizing we’re not going to send millions of people back, many of whom have children who might be U.S. citizens, and that there should be a more sensible way of dealing with it -- people understand that.

So it’s a matter of political will. Now, look, we’ve gone through a very tough year, and I’ve been working Congress pretty hard. So I know there may not be an appetite immediately to dive into another controversial issue. There’s still work that has to be done on energy. Midterms are coming up. So I don’t want us to do something just for the sake of politics that doesn’t solve the problem. I want us to get together, get the best ideas on both sides, work this through, and when it’s ready to go, let’s move. But I think we need to start a process at least to open up a smarter, better discussion than the one that is raging right now.

Okay? One more. I’ll give him the last question since this is his first ride on the plane. Read more here.