Obama to Meet With Billy Graham in North Carolina 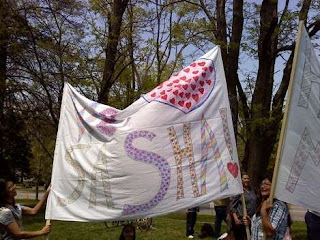 Check out Day one of the Obamas' getaway in Asheville, N.C. here. Day two here.
Update on Obama's meeting with Billy Graham:

The first lady departed just now in a separate plane from Asheville Regional. No sigh yet of the presidential motocade. Reports via twitter are that the meeting between President Obama and Billy Graham lasted 30 minutes. 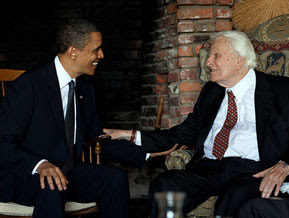 Also, she said its good they met because it will dispel rumors of any “rift” between the men. CT

Obama will spend a couple of more hours in North Carolina before he heads to West Virginia for the miners' memorial service. The Citizen-Times has been blogging Obama's trip:

Burton says that when Obama last spoke with Graham, in a telephone call in November on Graham's birthday, they said they'd get together as soon as possible. 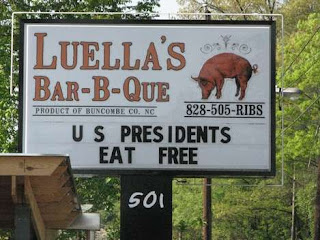 Obama is spending the weekend in Asheville and plans to speak at a memorial service later in the day in West Virginia for the 29 coal miners killed in an explosion on April 5.

Graham's last crusade was in 2005. Since his wife's death nearly three years ago, he has spent most of his time at his North Carolina home. Public appearances have been rare.

Michelle Obama is not expected to accompany her husband to meet Graham.

More on the meeting with Graham.
Check out some of the Citizen-Times reader submitted photos of the Obamas' trip. I included three of them in this post. Love the secret service in the golf cart. 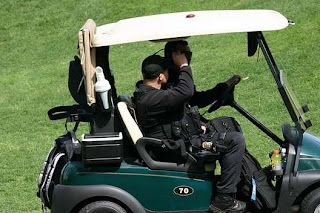