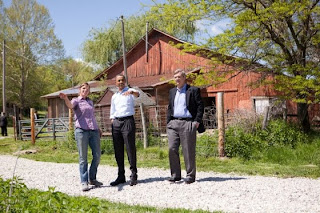 Obama at MogoOrganic in Iowa yesterday
Obama essentially said what Harry Reid said today, climate legislation first, then immigration. I think the White House wants Lindsey Graham in its corner, since he's one of the few republicans working in a bipartisan manner. Graham threw a fit when he thought immigration reform was moving ahead of energy legislation:

ABOARD AIR FORCE ONE - President Barack Obama said Wednesday that there "may not be an appetite" in Congress to deal with immigration immediately after going through a tough legislative year.

Obama said that there's work to do on energy legislation, midterm elections are coming up and he doesn't want to do something "just for the sake of politics." He said he hopes to get a working group together to solve a wide range of issues on immigration in a way that can garner the support of the American people. AP

"We've gone though a very tough year and I've been working Congress very hard, so I know there may not be an appetite immediately to dive into another controversial issue," the president told reporters aboard Air Force Onereturning with him to Washington from a Midwest trip.