Obama to Pick Next Supreme Court Justice by May 26 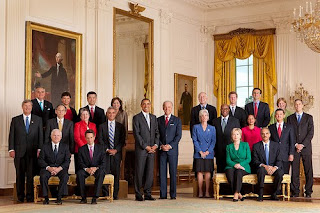 President Barack Obama will nominate a replacement to fill the Supreme Court seat of retiring Justice John Paul Stevens no later than May 26.

But a senior administration official said it’s “entirely likely” that the president’s pick will come “well before then.” The Hill

The possible nominees include:

I'm going to take a wild guess for fun and say it will be none of those or it's Janet Napolitano, which means he'd have to find a new Homeland Security Secretary.
Today, Obama wishes the retiring Justice, John Paul Stevens, Happy 90th Birthday.
Posted by Olga at 5:45 PM