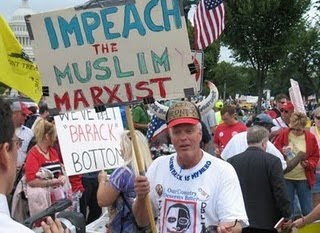 Politico has a tea party story I can agree with. Tea partiers identify mostly with republicans, after all, and they're not looking to be a third party. They just want to push their agenda on the republicans.
To be fair, I think the media and everyone else has been struggling to understand the tea party, which is like Dr. Jekyll and Mr. Hyde. On one hand, they seem deficit driven, on the other, they appear to be bigots mostly driven by fear:

2009 was the year when many journalists concluded they were slow to recognize the anti-government, anti-Obama rage that gave birth to the tea party movement.

2010 is the year when news organizations have decided to prove they get it.

And get it. And get it some more.

Part of the reason is the timeless truth in media that nothing succeeds like excess. But part of the reason is a convergence of incentives for journalists and activists on left and right alike to exaggerate both the influence and exotic traits of the tea-party movement. In fact, there is a word for what poll after poll depicts as a group of largely white, middle-class, middle-aged voters who are aggrieved: Republicans.

This is an interesting point from Cindy Sheehan on how the media gave legitimacy to the tea party but not war protestors:

They’re being treated with a lot more respect than the anti-war movement was,” said Cindy Sheehan, the mother of a soldier who died in Iraq, who became the most visible face of those protests.

“The anti-war movement has always been treated as a fringe movement – even though at the height of our movement we had hundreds of thousands of people at protests and the majority of public opinion on our side,” said Sheehan, who spoke to POLITICO from a bus on her way to an Oregon protest against the Afghan war.