Why McCain is Losing 3 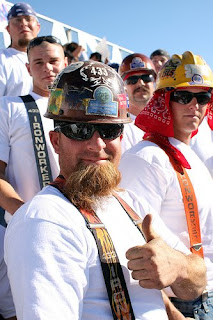 Already up to No. 3 in my little series of Why McCain is Losing:

NYT: Senator Obama was perfectly suited to this new approach. He told the crowd that trekked through the cold and snow to hear his victory speech at the Iowa caucuses:

“You said the time has come to move beyond the bitterness and pettiness and anger that’s consumed Washington. To end the political strategy that’s been all about division, and instead make it about addition. To build a coalition for change that stretches through red states and blue states.”

John McCain didn’t get it. He seemed as baffled by the new politics as an Al Jolson aficionado trying to make sense of the Beatles.

He answered the desire for a higher tone in politics with ads that likened Senator Obama to Britney Spears and Paris Hilton and with attacks that questioned Mr. Obama’s patriotism, blamed him for high gasoline prices and all-but-accused him of being a socialist.

Whether this is admirable or honorable is not the question here. In the current political and economic atmosphere, it seems very much like a roadmap to defeat.