Why McCain is Losing 2 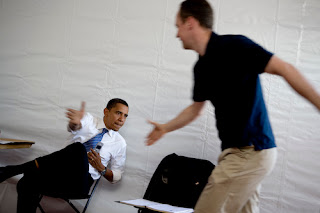 This is the second in my series of: Why McCain is Losing. I started my little series yesterday with this goodie.

Swamp: For weeks, bright-eyed young people have been showing up at my doorstep with Obama shirts on their backs and clipboards in their hands asking, with an unmistakable optimism, for whom I will be voting. Can't really say, I tell them - news reporter here, no petition-signihg, thank you. But they have meticulously recorded the preferences of my family and neighbors, double-checking it weekend after weekend and building a data base which clearly they plan to utilize on Election Day for a get-out-the-vote drive of unprecedented proportions.

And then, finally today, the first sign of Republican John McCain's campaign arrived in my mail-box, from the Republican Party of Virginia: A fold-out, full-color flier with photographs of a felon from Chicago, Tony Rezko, with warnings that Rezko, "convicted just this year on federal charges of fraud for receiving kickbacks in a land deal,'' is a friend of Obama and helped Obama buy his $1.65 million home in Chicago. Never mind that the conviction of power-broker Rezko for influence-peddling in Chicago had nothing to do with the fact that Rezko bought land next door to Obama on the South Side of Chicago and sold him a piece of it. None of the extensive federal investigations of Rezko's abuses ever accused Obama of any wrong-doing.
This is a presidential campaign?