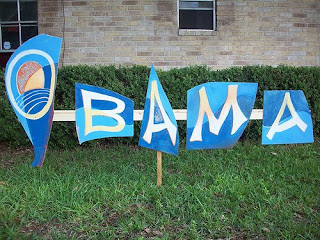 Plain and simple: We cannot trust a man who chose an incompetent running mate.

WaPo: In polling conducted Wednesday and Thursday evenings, after the disclosure that the Republican National Committee used political funds to help Palin assemble a wardrobe for the campaign, 51 percent said they have a negative impression of her. Fewer, 46 percent, said they have a favorable view. That marks a stark turnaround from early September, when 59 percent of likely voters held positive opinions.

The declines in Palin's ratings have been even more substantial among the very voters Republicans aimed to woo. The percentage of white women viewing her favorably dropped 21 points since early September; among independent women, it fell 24 points.

More broadly, the intensity of negative feelings about Palin is also notable: Forty percent of voters have "strongly unfavorable" views, more than double the post-convention number. Nearly half of independent women now see her in a very negative light, a nearly threefold increase.

Among a recent spate of conservative defections from McCain, one leading Republican was particularly pointed about the impact of Palin's professional background on his decision. Charles Fried, a professor at Harvard Law School and former solicitor general under Ronald Reagan, asked that the McCain-Palin campaign remove his name from several committees in large part because of "the choice of Sarah Palin at a time of deep national crisis."