John McCain is Our Next President 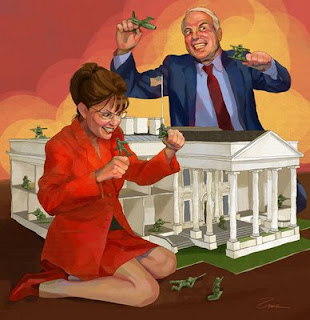 Just thought I'd shake you up a little.

That would be the headline on Nov. 5 if we decided not to vote or stopped canvassing or calling or talking to our friends and relatives. We would be in agony.

So for those who are thinking they may not vote because they're not really needed, you're needed more than ever. Nothing matters until Nov. 4. All these polls could be dead wrong. There's a lot going on this election and I doubt any pollster will have nailed it.

We can't have a squeaky election, where Obama wins by a hair because it will be contested until the cows come home. We need a great big undeniable win.
It's not in the bag.

Politico: Pennsylvania Gov. Ed Rendell is urging his fellow Democrats not to get complacent in the waning days of the presidential race.

“I think complacency is our biggest foe in Pennsylvania,” Rendell said Sunday on CBS' “Face the Nation.”

Rendell said he is “not taking anything for granted” and disputed a recent poll showing Sen. Barack Obama (D-Ill.) with a double-digit lead in Pennsylvania.

The governor joked he should start “charging [Alaska Gov. Sarah Palin] state income tax” because the Republican vice presidential nominee has spent so much time campaigning in his state.

“I think we are going to be all right,” Rendell said. “But every governor has to be a little bit nervous.”

Virginia Democratic Gov. Tim Kaine agreed, saying that he, too, is not taking anything for granted in his state, which has not voted for a Democrat for president since 1964.

“We realize we haven't done this for a very long time in Virginia, so we're going to consider ourselves the underdogs until we finally break the string,” Kaine said on “Fox News Sunday.”

Democratic strategist James Carville apparently didn’t get the memo, however,as he boldly declared “this race is done, it’s over,” on CNN’s “Late Edition.”