McCain is Proud of Palin 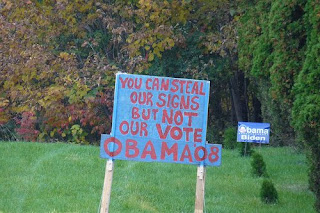 On Meet the Press, McCain said he's not defending Palin, he's proud of her. I wish someone would show him clips of his loony supporters accusing Obama of being a communist and all the rest of it.

What does McCain think about them? He needs to get his mob in line because they appear dangerous. Obama could be one of the best presidents we ever had but some folks aren't going to want to find out.

McCain didn't have much else to say for himself. Brokaw doesn't challenge his interviewees responses the way he should. Brokaw didn't even ask McCain about the back biting in his campaign.

I flipped to Fox News Sunday and they still believe that people want to elect the black guy in interest of affirmative action, not the most qualified candidate who happens to be black. Then, there is McCain's base, who don't want the scary black guy elected. Obama can't win.