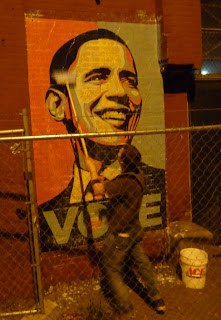 Heilman also said that Obama is further along in the transition from campaign to White House than any one knows. McCain mocks that. He says Obama is measuring for drapes. It just underlines Obama's smarts and intentions to hit the ground running.

A Q&A with Summers:

Lloyd Grove: So, first of all, what's your reaction to what has happened with Fannie Mae and Freddie Mac?

Larry Summers: Oh, it's a sad story. Something like what Secretary Paulson did was almost certainly necessary, given the problems the economy and those firms found themselves in. To have allowed the general financial failure of those firms would've been to invite catastrophe in financial markets, the housing markets, and the economy. It's a sad thing that things came to this point, and it's a reflection of the eight years of relatively unsuccessful economic performance that has fed through the financial system and the housing market. It's a reflection of the special interests that, over many years, created the "heads I win, tails people lose" privatized-gain-socialized-loss formula for the G.S.E.'s (government-sponsored enterprises, like Fannie Mae and Freddie Mac). And, in a different way, it's a reflection of the fact that their regulator was cheerleading for their capital adequacy until the very absolute last moment. So while it's often said that success has many fathers and failure is an orphan, this unfortunate episode probably does have a fair number of parents.

L.S.: Um, I hope not! During my time as secretary of the Treasury, to the outrage of a very large number of lobbyists in both political parties, I spoke out about the G.S.E.'s as a potential source of systemic risk, and raised questions about the adequacy of the regulatory framework within which they were operating, and pressed for clearer procedures to deal with any financial problems that they might have. Unfortunately, I was sorry at the time that there wasn't more Congressional responsiveness to those expressions of concern.