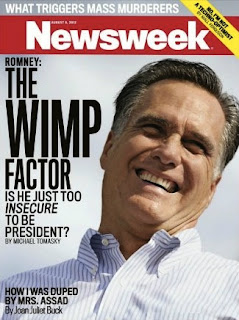 In Israel, Romney stated Obama's policy on Iran, only he used inflammatory language and he emphasized war. That's the difference between an adult and someone who's insecure.

Romney shouldn't be doing Netanyahu's bidding. All is not what it appears. In fact, Israel is considered the No. 1 spy threat to the US, according to an AP report.
In other Romney news, he's expected to pick a vice presidential candidate when he returns from his disastrous foreign policy tour (watch). I would tend to agree, it's going to be Paul Ryan. Be warned, the video also contains Cheney, who admits Palin was a mistake. She was more than a mistake. The GOP should have to spend eight years in the penalty box for even introducing her.
The ABC news guy says Cheney is back, new heart and all (he must have the best healthcare in the whole wide world) and ready to launch attacks against Obama. In a progressive nation, Cheney would be shunned.
In another ABC clip, the Romney camp says the election won't be about gaffes. If only it was just gaffes. It's more than that. Romney is a candidate who is woefully unprepared and not worldly enough to be president

If Netanyahu was smart, he'd be working on his relationship with Obama, not schmoozing with Mitt.

Romney's speech in Israel. Romney's voice, Netanyahu's words. Do we really want a president who can be easily manipulated by world leaders?