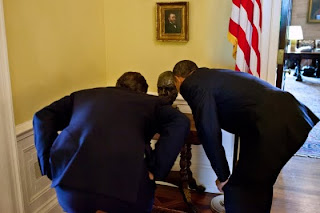 Lookie there! Obama & PM Cameron looking at Churchill at the White House

Unbeknownst to Romney, many in the media and republicans, Winston Churchill's bust resides at the White House. At a fundraiser Mitt said:


"I'm looking forward to the bust of Winston Churchill being in the Oval Office again,"

ABC didn't call him out on it. It's just another fumble for Romney. From the White House:

Now, normally we wouldn’t address a rumor that’s so patently false, but just this morning the Washington Post’s Charles Krauthammer repeated this ridiculous claim in his column. He said President Obama “started his Presidency by returning to the British Embassy the bust of Winston Churchill that had graced the Oval Office.”

This is 100% false. The bust still in the White House. In the Residence. Outside the Treaty Room.

News outlets have debunked this claim time and again. First, back in 2010 the National Journal reported that “the Churchill bust was relocated to a prominent spot in the residence to make room for Abraham Lincoln, a figure from whom the first African-American occupant of the Oval Office might well draw inspiration in difficult times.” Read the rest at White House Blog