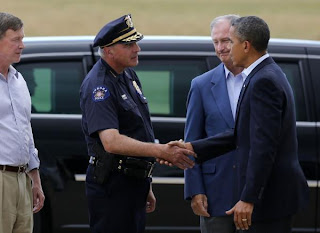 Obama and Aurora's police chief Daniel Oates, praised by Obama for doing everything right in the aftermath

The Obama administration fires back on welfare.

14 reasons why this is the worst Congress EVER.

Last week Romney lied about what Obama said about business. In 2002, Romney told Olympians: "You didn't get here solely on your own," which is exactly the spirit of Obama's message when it's not selectively edited.

Romney keeps making stuff up. Maybe he feels his policies are too weak to stand on.

ABC finds that some of Romney's Olympic records have likely been destroyed.
Posted by Olga at 7:16 PM