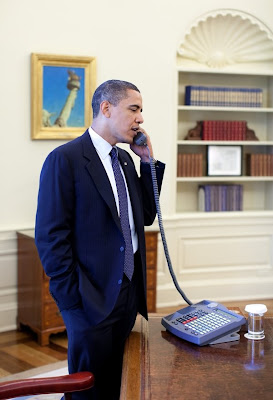 Obama welcomes Specter
Update: Specter says the GOP outlook is "bleak." Specter seems to be motivated mostly by getting reelected. But his switch points to the big picture-- the democratic umbrella is getting bigger and the GOP is getting smaller.
Update: Obama calls Sen. Arlen Specter to tell him he's "thrilled."

CNN: A Specter party switch would give Democrats a filibuster-proof Senate majority of 60 seats if Al Franken holds his current lead in the disputed Minnesota Senate race.

Specter, a five-term Senate veteran, was expected to face a very tough primary challenge in 2010 from former Rep. Pat Toomey, who nearly defeated Specter in the Pennsylvania GOP Senate primary in 2004.

I'm not getting too excited about this (see Sen. Arlen Specter's statement below), but the less input republicans have, the better.
I know they don't like all the spending and taxes but it seems investment on the front end will pay off in the long run.
If our economy actually turns into a green economy as some envision, that's going to mean jobs, inventions, exports, energy savings and a more sustainable economy. Obama doesn't seem interested in "big government," only active and smart government. If we're going to have government at all, we need it to run well and I think that's Obama's aim.
Mostly, republicans are serving as a roadblock to progress as they sort through their own internal issues. They aren't offering any solutions, except lower taxes and no spending.
While their vocal grassroots minority is spewing not much more than hate. I understand opposition, but when it turns into calling the president a communist, a terrorist and all the rest, then their views have little value.
The GOP's primary belief is government is bad, so what's the point of them of even bothering? Just get out of the way.
The spectrum of views within the democratic party -- from the conservative Blue Dogs to the New Democrat Coalition-- seems to be representative of the nation as it is today. The GOP in its current form represents a minority.
Sen. Specter's statement:

I have been a Republican since 1966. I have been working extremely hard for the Party, for its candidates and for the ideals of a Republican Party whose tent is big enough to welcome diverse points of view. While I have been comfortable being a Republican, my Party has not defined who I am. I have taken each issue one at a time and have exercised independent judgment to do what I thought was best for Pennsylvania and the nation.

Since my election in 1980, as part of the Reagan Big Tent, the Republican Party has moved far to the right. Last year, more than 200,000 Republicans in Pennsylvania changed their registration to become Democrats. I now find my political philosophy more in line with Democrats than Republicans.

When I supported the stimulus package, I knew that it would not be popular with the Republican Party. But, I saw the stimulus as necessary to lessen the risk of a far more serious recession than we are now experiencing.

Since then, I have traveled the State, talked to Republican leaders and office-holders and my supporters and I have carefully examined public opinion. It has become clear to me that the stimulus vote caused a schism which makes our differences irreconcilable. On this state of the record, I am unwilling to have my twenty-nine year Senate record judged by the Pennsylvania Republican primary electorate. I have not represented the Republican Party. I have represented the people of Pennsylvania.

I have decided to run for re-election in 2010 in the Democratic primary.

I am ready, willing and anxious to take on all comers and have my candidacy for re-election determined in a general election.

I deeply regret that I will be disappointing many friends and supporters. I can understand their disappointment. I am also disappointed that so many in the Party I have worked for for more than four decades do not want me to be their candidate. It is very painful on both sides. I thank specially Senators McConnell and Cornyn for their forbearance.

I am not making this decision because there are no important and interesting opportunities outside the Senate. I take on this complicated run for re-election because I am deeply concerned about the future of our country and I believe I have a significant contribution to make on many of the key issues of the day, especially medical research. NIH funding has saved or lengthened thousands of lives, including mine, and much more needs to be done. And my seniority is very important to continue to bring important projects vital to Pennsylvania’s economy.

I am taking this action now because there are fewer than thirteen months to the 2010 Pennsylvania Primary and there is much to be done in preparation for that election. Upon request, I will return campaign contributions contributed during this cycle. Read the rest at Salon