Poll: Obama Taking the Country in the Right Direction 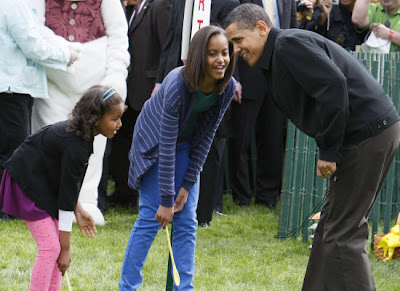 ...the percentage of Americans saying the country is headed in the right direction rose to 48 percent, up from 40 percent in February. Forty-four percent say the nation is on the wrong track.
Not since January 2004, shortly after the capture of former Iraqi dictator Saddam Hussein, has an AP survey found more "right direction" than "wrong direction" respondents. The burst of optimism didn't last long in 2004.

For the first time in years, more Americans than not say the country is headed in the right direction, a sign that Barack Obama has used the first 100 days of his presidency to lift the public's mood and inspire hopes for a brighter future.

Intensely worried about their personal finances and medical expenses, Americans nonetheless appear realistic about the time Mr. Obama might need to turn things around, according to an Associated Press-GfK poll. It shows most Americans consider their new president to be a strong, ethical and empathetic leader who is working to change Washington.

Nobody knows how long the honeymoon will last, but Mr. Obama has clearly transformed the yes-we-can spirit of his candidacy into a tool of governance. His ability to inspire confidence - Mr. Obama's second book is titled "The Audacity of Hope" - has thus far buffered the president against the harsh political realities of two wars, a global economic meltdown and countless domestic challenges.

"He presents a very positive outlook," said Cheryl Wetherington, 35, an independent voter who runs a chocolate shop in Gardner, Kansas. "He's very well-spoken and very vocal about what direction should be taken."

Other AP-GfK findings could signal trouble for Mr. Obama: