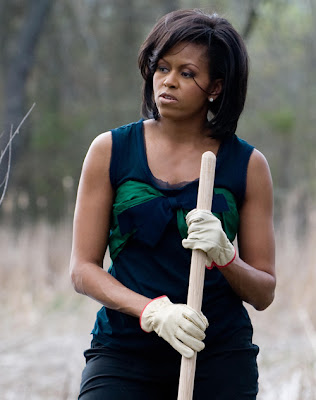 Michelle Obama in a word: Genuine.
She is a sincere person with solid moral values. She supports her husband and is plainly a good mother. Mothering comes first and I think a lot of women relate to that. Women can't always acknowledge they are mothers first, especially in the workplace. Tell your boss that your children come first and see what kind of reception you get.
She's also funny, kind, intelligent and warm. She's interesting. What else could you want in a First Lady?

Swamp: But this first lady is outpacing her recent predecessors: At 76 percent, she ranks higher than Laura Bush did in July 2001 (with a 64 percent favorable rating) and higher than Hillary Rodham Clinton did in May 1993 (at 60 percent).

Pew didn't weigh in on the Michelle O. vs Jackie O. debate.

And Michelle Obama is reaching across party lines: 67 percent of Republican women have a favorable view of her, and that's up 21 points since January.

At 76 percent, she has gained eight points among the general public since January, Pew's polls then and now show. And with 60 percent of all Republicans surveyed voicing a positive opinion, that's up 14 points from January.