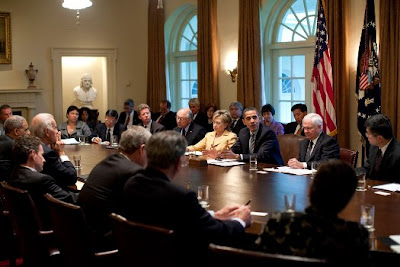 Update 4-29: See full video here.
The town hall will be held at 11:20 a.m. Likely live streamed at cnn.com or msnbc.com
Update 4-28: ...the President will depart the White House to travel to St. Louis, Missouri. The departure from the South Lawn is open press and the arrival at Lambert-St. Louis International Airport is open press.

After arriving in Missouri, the President will hold a town hall at Fox High School in Arnold to discuss the progress the country has made over the first 100 days and the hard work that lies ahead. He will then take questions from the audience.

Obama will hold a town hall in Missouri in the day and in the eve, from Washington, he'll be on our TVs again for his own primetime 100 day update.

Neither official knew details of Obama’s other plans for the day.

The White House said Obama will hold a town hall meeting, where he will discuss the first 100 days and take questions about the administration’s agenda. No other details were released. News-Leader

Obama town hall (partial video for now, I'll post full when it's up). Obama says we're doing what we said we were going to do. He also poked a little fun at the tea baggers. I think that was the first time he has even mentioned them. He poked fun at Fox. He talked about healthcare reform and social security. He tried to connect the dots on the environment and the economy. Many people don't see the direct relationship between their pocketbook and climate change, he said. They think it's just about polar bears but it's not.