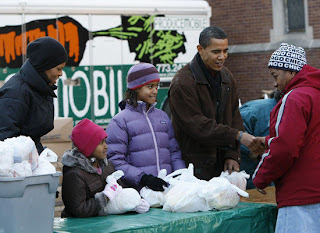 We finally have a president that gets it.

HP: CHICAGO - President-elect Barack Obama and his wife took their daughters to work at a food bank on the day before Thanksgiving, saying they wanted to show the girls the meaning of the holiday, especially when so many people are struggling.

Ten-year-old Malia and 7-year-old Sasha joined their parents to shake hands and give holiday wishes to hundreds of people who had been lined up for hours at the food bank on Chicago's south side.
....
Obama then turned to his wife and suggested they go visit the kids. Secret Service agents, looking surprised, disappeared inside the building to accommodate his request.

Minutes later, hundreds of children were brought down to the school auditorium, and Obama loped onstage as they screamed and cheered.

"I just wanted to come by and wish everybody a happy Thanksgiving," he said. He then asked the children what they would be eating for Thanksgiving dinner.

Perhaps it was a hint at the planned menu for the Obamas, who are planning to host a holiday gathering at their Hyde Park home.

The president-elect then took questions from the children, one of whom wanted to know what it was like to be followed around all the time. It is a topic that seems to touch a nerve in Obama, who has lamented the lack of privacy that comes with his new job. Read the rest and see a slide show.