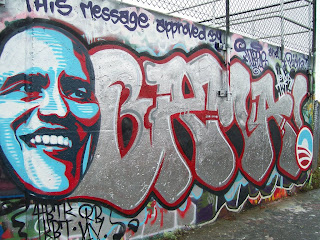 They're sizing him up and finding relief.

WaPo: Adm. Michael Mullen, the chairman of the Joint Chiefs of Staff, went unarmed into his first meeting with the new commander in chief -- no aides, no PowerPoint presentation, no briefing books. Summoned nine days ago to President-elect Barack Obama's Chicago transition office, Mullen showed up with just a pad, a pen and a desire to take the measure of his incoming boss.

There was little talk of exiting Iraq or beefing up the U.S. force in Afghanistan; the one-on-one, 45-minute conversation ranged from the personal to the philosophical. Mullen came away with what he wanted: a view of the next president as a non-ideological pragmatist who was willing to both listen and lead. After the meeting, the chairman "felt very good, very positive," according to Mullen spokesman Capt. John Kirby.

Military officers are looking forward to debate, not Kool-Aid.

"Open and serious debate versus ideological certitude will be a great relief to the military leaders," said retired Maj. Gen. William L. Nash of the Council on Foreign Relations. Senior officers are aware that few in their ranks voiced misgivings over the Iraq war, but they counter that they were not encouraged to do so by the Bush White House or the Pentagon under Donald H. Rumsfeld.