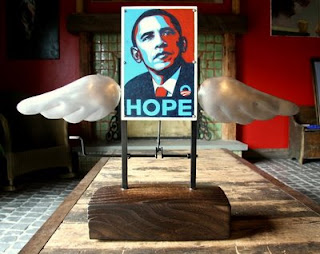 Obama's trying to get used to being the big cheese with fewer freedoms. I know there are sadder tales out there and this is what Obama signed up for, but this is kind of sad.

WaPo: "This time I answered, 'Hello, Mr. President,' " Link said. "When he called, it used to just be 'Hey, Barack. What's going on?' But plain old Barack is gone."

Obama's home in Chicago's Hyde Park neighborhood has become a compound guarded ever more closely by bomb-sniffing dogs and Secret Service agents who peer through binoculars at neighboring rooftops. When he travels around the city, it is in an armored limousine and 20-car motorcade, so he has mainly stayed bunkered at home or a downtown transition office. Last week, Obama told one friend that he felt "a little boxed in."
This is only the beginning of the transformation that awaits the president-elect and his family. In two months, they will move into a sterile house in a unfamiliar city where they have never felt particularly comfortable. Friends say Obama is savoring these final weeks in Chicago and spending as much time as possible with his family before he takes the oath of office Jan. 20.