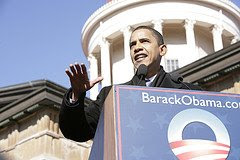 McCain is going down the road of trying to paint Obama as a flip flopper, as someone who can't be trusted (hmmm, I wonder who he's tagging on that one?). WaPo columnist Charles K. recently called Obama malleable.
I say, what's wrong with being flexible? We've had a president who has only trusted his gut and has been as stubborn as an obnoxious mule and as visionary as a turtle. Bush has never admitted a mistake and doesn't listen to reason when it's presented.
I'd rather have someone who changes his mind, if it works. We need someone who has the COURAGE to change his mind. The problem is McCain is having troubles campaigning against Obama's many strengths.
On public financing, Obama needs to win this election and to do that he needs money. That was a courageous decision to make because I'm sure he was aware of the ramifications. But I don't think the average person gave it much thought. People have more important things to think about.
This country is in great decline and we don't need stodgy and more of the same. We need enthusiasm and brilliance. Obama has established a vision for this country. McCain hasn't done that. I know what Obama's America looks like.
There is a clear distinction between Obama and McCain -- Obama is a thinker and has a clear vision, yet he's pragmatic. McCain is ordinary on both counts.
McCain has changed his position on things that really matter, keeping the Bush tax cuts and immigration reform.
If anyone would stop and think what Obama has accomplished so far, what he's overcome, the masses he's inspired, the audacity that he's had, you wouldn't have to wonder who is likely to be our next president. Sure, it's going to get bitter, the GOP is going to roll out all their ol, petty ammunition but it's not going to work because while the country's in decline, there is a movement to lift it up.
Posted by Olga at 8:59 AM