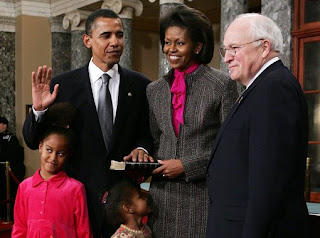 Dick Cheney used to admire Obama too. That is until he was succeeding.

Maureen Dowd paints Rove as fool in his efforts to paint Obama as an elitist:

The cheap populism is really rich coming from Karl Rove. When was the last time he kicked back with a corncob pipe to watch professional wrestling?

Rove is trying to spin his myths, as he used to do with such devastating effect, but it won’t work this time. The absurd spectacle of rich white conservatives trying to paint Obama as a watercress sandwich with the crust cut off seems ugly and fake.

Obama can be aloof and dismissive at times, and he’s certainly self-regarding, carrying the aura of the Ivy faculty club. But isn’t that better than the aura of the country clubs that tried to keep out blacks? It’s ironic, and maybe inevitable, that the first African-American nominee comes across as a prince of privilege. He is, as Leon Wieseltier of The New Republic wrote, not the seed but the flower of the civil rights movement.

Conservatives love playing this little game, acting as if the “elite” Democratic candidates are not in touch with people like themselves, even though the guys doing the attacking — like Rove, Limbaugh, O’Reilly and Hannity — are wealthy and cosseted.

Haven’t we had enough of this hypocritical comedy of people in the elite disowning their social status for political purposes? The Bushes had to move all the way to Texas from Greenwich to make their blue blood appear more red.

Karl Rove brought us George Bush, so why would anyone listen to what he had to say? Be gone.
Posted by Olga at 9:04 AM