Obama says we have "saved or created four turkeys:" 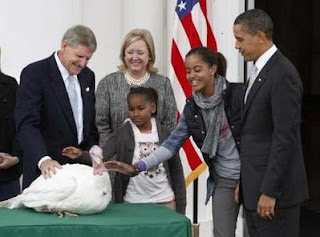 Malia said: "He's like a large chicken." More Courage photos
Courage the Turkey is now headed to Disneyland.
Obama, accompanied by Malia and Sasha, talked about the fate of Courage. It was pretty entertaining. If you missed the Turkey pardon trailer, check it out here.
Abraham Lincoln was the first to pardon a turkey:

Adding to the confusion, President Bill Clinton claimed on Nov. 26, 1997 at his pardoning ceremony: "President Truman was the first President to pardon a turkey."

But the Truman Library wrote in 2003: "The Library's staff has found no documents, speeches, newspaper clippings, photographs, or other contemporary records in our holdings which refer to Truman pardoning a turkey that he received as a gift in 1947, or at any other time during his Presidency."

In fact, "Truman sometimes indicated to reporters that the turkeys he received were destined for the family dinner table," the library wrote.

It appears that Abraham Lincoln, in a way, was the first to spare a turkey. But it wasn't a Thanksgiving turkey. It was a Christmas turkey his son had taken for a pet. Read more at First Read.