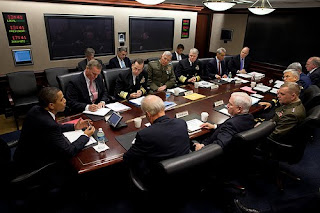 Update: Obama is expected to announce strategy/troops for Afghanistan Dec. 1.
In addition to a just-added meeting with all the Afghanistan bigwigs tonight at 8 pm eastern, Obama is meeting with his cabinet and his national security team. He's also having lunch with Joe Biden and having a one-on-one meeting with Hillary Clinton. This could be a signal that Obama will soon announce a strategy in Afghanistan. Obama will also speak about science, math and engineering at 11:40 am.
The attendees of this evening's meeting, according to Politico: