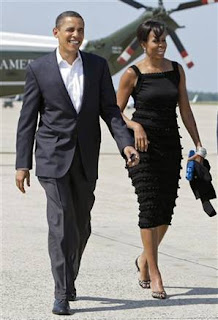 Update: video below
The NYT says the Obamas are heading to New York City to take in a play Saturday night.
About the play:

Joe Turner's Come and Gone, part of Mr. Wilson's ten-play Century Cycle, which depicts the African American experience in each decade of the twentieth century, originally opened on Broadway in 1988, receiving a Tony Award nomination for Best Play and winning that year's New York Drama Critics Circle Award. Set in 1911, it tells the story of Herald Loomis who, after serving seven years hard labor, has journeyed North with his young daughter and arrives at a Pittsburgh boarding house filled with memorable characters who aid him in his search for his inner freedom. Rialto

The Obamas ate at the Blue Hill restaurant. See the review of the restaurant here.

Following dinner at Blue Hill, a West Village restaurant touted by New York magazine as a "seminal Greenmarket haven" that features food grown by chef and owner Dan Barber on his upstate farm, the president and first lady were headed to the Belasco Theater to see "Joe Turner's Come and Gone."

The play by August Wilson is about black America in the early 1900s, with residents of a boardinghouse recalling their migration from the sharecropping farms of the South to the industrialized North.

As the motorcade drove through the West Village, crowds of people gathered on the sidewalks of the blockaded streets to wave as he passed. The street in front of the Blue Hill was closed to passersby, with gates and security personnel keeping people away. MSNBC

Barber sees his cooking — which he calls American seasonal — as an effort to raise awareness about everyday food choices. At Stone Barns, which is set on a working farm, the menu is a simple list of fresh ingredients.
Barber, who was named one of the nation's best new chefs in 2002 by Food & Wine magazine, previously was recognized by the Beard Foundation as the top New York chef in 2006. He also was a finalist for the top chef last year.
The James Beard awards are the Oscars of the food world, and honor those who follow in the footsteps of Beard, considered the dean of American cooking when he died in 1985.
Barber's award comes at a time when much is being made of the importance of reconnecting Americans with food at its source. For example, first lady Michelle Obama recently planted a vegetable garden at the White House, a move long sought by proponents of sustainable agriculture. NYDN

A photo montage of the Obamas' visit to New York City: