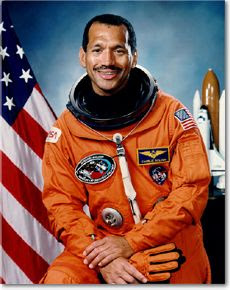 UPDATE JULY 16: Bolden and Garver confirmed.
Obama also named Lori Garver, as the deputy administrator nominee. Garver had been on Obama's space transition team, checking out the agency and it's waste. During a call to Atlantis on Wednesday (if you didn't hear that call, listen here), Obama told the crew he was going to be announcing an administrator soon.
Bolden has had a few backers, namely Sen. Bill Nelson of Florida:

U.S. Sen. Bill Nelson, the Florida Democrat who flew with Bolden on a 1986 shuttle mission, was one of the former astronaut's biggest backers.

Nelson described Bolden as the right pick to take on the hurdles facing NASA, particularly budget restrictions and the impending retirement of the shuttle.

"Charlie is the kind of dynamic leader I believe the president was looking for and I know he'll meet these challenges head on," he said.

Gen. Charles Bolden, Nominee for Administrator of NASA
Charles Bolden retired from the United States Marine Corps in 2003 as the Commanding General of the Third Marine Aircraft Wing after serving more than 34 years, and is currently CEO of JackandPanther LLC, a privately-held military and aerospace consulting firm. Gen. Bolden began his service in U.S. Marine Corps in 1968. He flew more than 100 sorties in Vietnam from 1972-73. In 1980, he was selected as an astronaut by NASA, flying two space shuttle missions as pilot and two missions as commander. Following the Challenger accident in 1986, Gen. Bolden was named the Chief of the Safety Division at the Johnson Space Center with responsibilities for overseeing the safety efforts in the return-to-flight efforts. He was appointed Assistant Deputy Administrator of NASA headquarters in 1992. He was Senior Vice President at TechTrans International, Inc. from 2003 until 2005. Gen. Bolden holds a B.S. in Electrical Engineering from the U.S. Naval Academy, Annapolis and a M.S. in Systems Management from the University of Southern California.

Lori Garver, Nominee for Deputy Administrator of NASA
Lori Garver is the President of Capital Space, LLC, and has served as Senior Advisor for Space at the Avascent Group, a strategy and management consulting firm, based in Washington, D.C. She was the lead civil space policy advisor for Obama for America, and she helped lead the Agency Review Team for NASA during the Transition. She has intimate familiarity with the agency and knows well the challenges it faces. From 1998 to 2001, Ms. Garver served as NASA’s Associate Administrator of the Office of Policy and Plans. Reporting to the NASA Administrator, she oversaw the analysis, development, and integration of NASA policies and long-range plans, the NASA Strategic Management System, and the NASA Advisory Council. Ms. Garver also served as a primary spokesperson for NASA. Prior to this appointment, she served as a Senior Policy Analyst for the Office of Policy and Plans, and Special Assistant to the Administrator. Ms. Garver earned an M.S. in Science, Technology, and Public Policy from the George Washington University and a B.A. in Political Science and Economics from Colorado College.