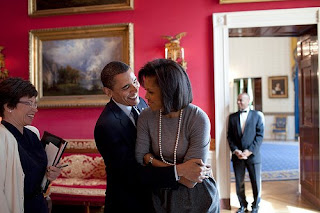 It was just two days after the Inauguration when an e-mail went around to Michelle Obama's staff, instructing everyone to be in the East Room of the White House at 3 that afternoon. The First Lady's advisers arrived to find the room filled with ushers and plumbers, electricians and maids and kitchen crew gathered in a huge circle, and Michelle in a T shirt and ponytail, very casual and very much in charge.

"This is my team that came with me from Chicago," Michelle said, pointing to her communications staff and policy people. "This is my team who works here already," she went on, indicating the ring of veterans around the room. Many of the household staff had served for decades; some had postponed retirement because they wanted to serve an African-American President. And so the two groups formed concentric rings and spent the next hour or so making sure that everyone had a chance to meet everyone else. I want you to know that you won't be judged based on whether they know your name, Michelle had warned her advisers. You'll be judged based on whether you know theirs. (See pictures of Michelle Obama behind the scenes.)

Michelle's day starts at dawn, when she walks the dog and then hits the treadmill; she's had the same personal trainer for about 10 years, who has relocated to Washington from Chicago. There are no regularly scheduled meetings with her staff and never any meetings before the girls go to school. She tells aides which days she wants to be "on"; she can concentrate all her public events into a couple of days a week, leaving her free to sit in a lawn chair at the soccer field watching the girls play. Then there are the parent-teacher conferences, the play, the birthday party, the calls with parents to discuss the sleepover. "Kids force you into a normalcy," she says, "that, you know, it even trumps this [place] in some ways."

The Obamas' marriage has a history of tension around chores: as his career took him away for long stretches, Barack admitted, "my failure to clean up the kitchen suddenly became less endearing." Michelle smiles about this and says, "That's off the table." Now they live in a house with 35 bathrooms and in which all domestic tasks are taken care of. "She thinks it's nice that people play 'Hail to the Chief,' " the President says. "But I still am expected for family dinner on time, and I still have to walk the dog." He gets the night shift, Michelle says. "That's usually right before bed. It's like 10 p.m. We sort of handle Bo like we did the kids. I'm the early-morning person ... Once I go to bed, I don't care what happens. Just make sure the dog doesn't have an accident." She talks about the dog with the smitten tone of a girl who never had one of her own before. She walks him frequently, sometimes every couple of hours. "He's getting to the point where he can be naughty," she says, "like you walk in the room and it's like, 'Where'd you get that sock?' " The family has learned to limit Bo's range of potential destruction by keeping doors closed. "We try to set him up for success," she says with a knowing smile. Read more at TIME